Who would have imagined that the Director of the Research Center at the Pedro Curi Institute of Tropical Medicine (IPK), Maria Guadalupe Guzmán Tirado, had never wanted to study medicine? He admits this, while telling me that his childhood fantasy was to study astronomy and that, as an alternative to not finding the way, he enrolled in the University of Havana’s Faculty of Mathematics.

She did not find the motivation she needed in that profession and looked for other options at the Institute of Oceanography, at the Higher Pedagogical Institute and other institutions, she even thought of a course for a flight attendant, but she had already advanced at that point. The only profession I started on December 31 of that year was medicine and that was the choice.

The results of these investigations were awarded by the Cuban Academy of Sciences and the Ministry of Public Health, and more recently by the United Nations Educational, Scientific and Cultural Organization (UNESCO) with the International L’Oréal-Unesco Women and Science Prize.

“I think today life has given me great opportunities by putting me through very difficult situations. I was able to be there during the dengue hemorrhagic fever epidemic in 1981, a big fight, but a school that affected me forever. I have been able to encounter other situations also related to dengue fever, such as the epidemic that had a major impact in Santiago de Cuba in 1997 and 2001 and in other emergencies.

“To refer to the most recent, pandemic influenza, Zika, Ebola and, logically, COVID-19, not to forget the neuropathy epidemic of the 1990s. Each of these situations were different, stressful and complex, but they taught me and allowed me to grow,” he confirms.

She just wants to keep working and researching, and basically, advancing knowledge and getting dengue under control. “This is a disease that we know a lot about, but at the same time we still have a long way to go to decipher its mechanisms.

“Unlike COVID-19, we have in dengue, in addition to four viruses and the person, the mosquito vector, another organism. We must work towards having a healthy environment to avoid or eliminate mosquito breeding sites in our gardens, at home, in the workplace .

“We must be alert for any symptoms such as fever, general malaise, fatigue and joint pain, and go to the doctor immediately. If dengue is clinically suspected, watch for warning signs that predict the severity of the clinical picture and, logically, seek immediate medical attention. This is a battle for everyone and together. We can win it, but everyone does what suits them. We need a union to fight it.”

About a year ago, while developing one of his most important projects: the international course on dengue and other arboviruses, now in its 17th year. edition, was surprised by the news that she had been awarded the L’Oréal-UNESCO International Prize for Women and Science, which is awarded annually and invites institutions and personalities to propose women scientists who demonstrate an outstanding career for their results in the life sciences.

According to the UNESCO website, Guzmán Tirado has been rewarded for his pioneering work, which has made it possible to better understand and treat dengue fever or tropical influenza, based on an understanding of its aetiology, treatment of symptoms and prevention. It was proposed by Latin America and the Caribbean and had the honor of being the first Caribbean scholar to be awarded.

For this reason, when returning to this disease, he notes that “our group has developed research in it of a high scientific level, which has provided new knowledge in the world regarding the risk factors for dengue hemorrhagic fever, both in the individual and in the community. Study, diagnosis and control of viruses causing this disease. and its clinical treatment.

“It was important to work collaboratively with institutions from other countries and the Pan American Health Organization to combat dengue, Zika, chikungunya and other arboviruses.

“It is important to emphasize that this UNESCO Prize is also for results that are part of the work of a group of researchers at a high scientific level who are very committed to science, the IPK and our country. I have had the good fortune to be with them and to share their knowledge, ideas and friendship.”

The IPK has been precisely its center since it arrived there in September 1980. “I feel closely connected to its history, to the development after the 1970s when Fidel directed his strengthening to confront infectious and tropical diseases.

“On the other hand, I also have a familial relationship with this institution, which is inextricable, part of my family and the purpose of my life. I had the opportunity to work closely with Professor Gustavo Corrie, his director from the late 1970s to 2011, and my husband.”

Today, decades after his dedication to medical research, Guzmán Tirado enjoys listening to music, interacting with family and friends, enjoying his four-year-old granddaughter Alejandra, connecting with nature, and observing and listening to people.

“I really like seeing young people, talking to them, knowing what they want, how they see and analyze things, and conversing with those who are moving towards science. The world needs science to face current and future problems, and science needs women, their abilities, their intelligence, their perception, their way of seeing life, and their tenderness. That’s why I’ll always be there.” 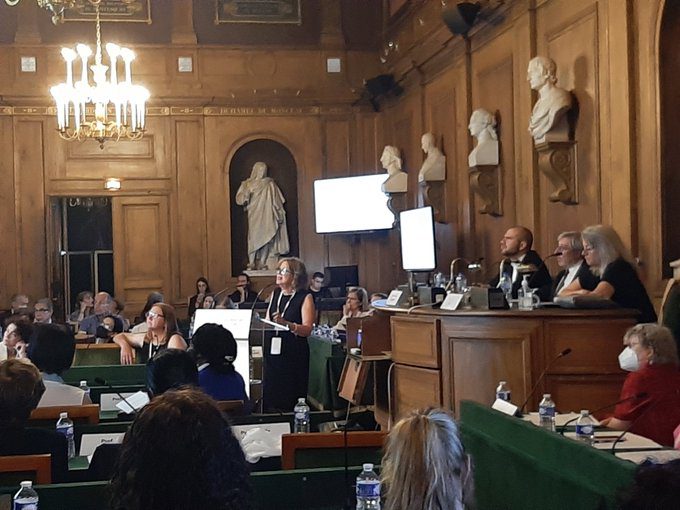 A moment in which Dr. Guadalupe Guzmán presented the results and achievements of her research on dengue fever, before the French Academy of Sciences and before the international jury of the L’Oréal-UNESCO International Prize. Photo: @YahimaEsquivel/Twitter

She has authored more than 300 scientific articles and short publications, including two hypotheses, seven patents, and 20 book chapters. Principal researcher on more than 70 national and international projects and a full-time professor with more than 130 training courses in Cuba, the United States, Latin America and the Caribbean.

It was also included, last October, in the WHO’s new Scientific Advisory Group on the Origin of New Pathogens. With 25 experts, she has a mission to continue investigating how SARS-CoV-2 came about, another challenge for this scientific woman.