As part of the “Draw the Smile” project, students from the Higher Institute of Medical Sciences in Havana Victoria de Giron visited on Friday the oncology room of the Juan Manuel Márquez Children’s Hospital in Marianao and the home for children without sub-protection located in the heights of La Lisa.

In both places, Daniela Pacifico, Daniel Bacalao, Melissa Sura and Lazaro Horta Donations sent by students and other staff to children.

As Daniel Bacalao, one of the future doctors involved in the initiative, posted on his Facebook account, During the visit to the oncology department, they gave gifts to parents and relatives.

“In compliance with biosecurity measures, from a distance we saw the childlike faces that smiled under Nasobuku, others waved their hands to say hello and others in a gentle voice thanking us from afar,” he said.

The next stop on the tour was the home of children without subsidiary protection in Alturas de La Lisa.

“Here we met the beautiful and kind helpers responsible for looking after and nurturing these children, we met the mischievous boys and their aspirations to be doctors, athletes, accountants and even got to know who the worst dominoes were,” he said.

Undoubtedly, it was a lucrative age in which the gesture of many people supporting such actions was distributed. 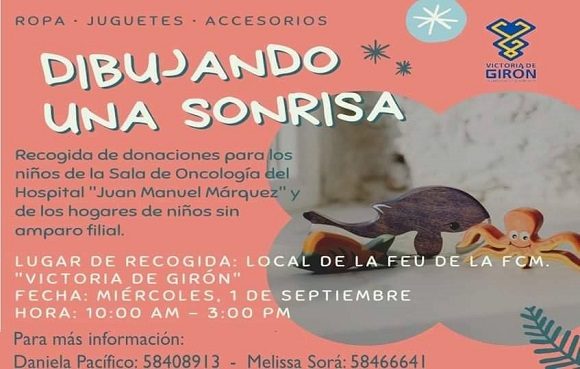