The 2nd World Summit on Traditional and Complementary Medicine: Towards Integrative Medicine, which took place from 16-25 July, and brought together more than 180 well-known speakers from 30 countries. With the aim of exchanging relevant experiences, and creating the possibility of knowing the different realities of each region of the world, the event was organized by Medical College of PeruAnd Through its Committee on Traditional, Alternative and Complementary Medicine, with the support of Network of Conventional, Complementary and Integrative Medicines, The Brazilian Academic Confederation of Integrative Health (capsaicin) and the Academy of Integrative Health and MedicineAnd In addition to supporting the PAHO/WHO, through its representation in Peru and in the presence of PAHO/WHO representatives in Peru, Carlos Garzon and Brazil, Socorro Gros, as well as as ambassadors from different countries.

The event took place virtually over six days of activities, 60 hours of live broadcasting on two YouTube channels with simultaneous English/Spanish subtitles, resulting in over 50,000 views.

The main conference titled “WHO Traditional Medicine Strategy” presented by Zhang Zhi, Head of Complementary, Traditional and Integrative Medicine Department of the World Health Organization, presented a global vision of complementary and complementary traditional medicine and its future prospects in order to coordinate the integrated development of TCIM in all countries.

The opening ceremony witnessed interventions from various sides. Here we highlight some of them.

PAHO/WHO Representative in Brazil, Socorro Gros, stated: “This network of traditional, complementary and integrative medicine in the Americas is one of the fruits of the joint work of countries, because the organization promotes this union between countries to generate actions that improve people’s lives. I would also like to I highlight and congratulate the effort made by Brazil, together with BIREME, with the MTCI Virtual Health Library and with Brazilian Academic Confederation of Integrative Health, which has developed evidence maps that give greater clarity to the evidence relevant to conventional and integrative medicine. This helps establish integrative practices in our health services and systems, particularly in primary care and public policies in our countries.”

Chair of the MTCI and Organizing Committee, Martha Villar, who highlighted: “The World Health Organization, in collaboration with the Pan American Health Organization, in the 40 years of celebration of primary health care in the Astana Declaration, affirms that success in health care and primary health care will depend on Development of knowledge and skills using scientific and traditional knowledge.In this context, and with the aim of creating a space for the exchange of knowledge from different parts of the world, the College of Medicine of Peru organizes this summit, through its Committee on Traditional, Complementary and Integrative Medicine.Always seeks to express TCIM in health systems, as well as Saving the profound value of ancestral knowledge for the health of communities.”

According to Carlos Garzón, PAHO/WHO Representative in Peru, “Traditional and complementary medicine is an important and often underestimated part of health care, which is practiced in all countries of the world, with increasing demand. of proven quality and efficacy, contributes to ensuring that all people have universal access to health.” To support this, PAHO has developed a multidisciplinary working group, already discussed in previous presentations, consisting of many modules. However, I would like to highlight the Department of Health Services, the Gender and Culture Unit, and the Latin American and Caribbean Information Center on Health Sciences (BIREME). Furthermore, as mentioned, I would also like to highlight the MTCI Virtual Health Library, which aims to facilitate access, visibility, use and creation of scientific, technical and educational content of great importance at this time.”

The Second World Summit was also marked by conferences and discussions related to the topic “Research and Information Management in TCIM”, which was discussed in the first session on the overall landscape of research in traditional, complementary and integrative medicines (TCIM). At that time, BIREME was represented by Director of Information Resources and Services, Veronica Abdallah, who spoke on the topic: “TCIM Scientific and Technical Publications for the Americas: Vision, Access, Use and Generation.” Veronica also said that “all of the work that we are presenting today on behalf of the MTCI Americas Network began with a seed sown at a meeting in Nicaragua in June 2017, through the Socorro Gross Initiative, on that occasion, as the PAHO/WHO representative in the country, Which promoted the meeting “Advances towards Holistic Health, Contributions of Traditional and Complementary Medicine”. On this occasion, it presented a proposal to build a VHL to promote, develop, define, plan and manage information within the theme of TCIM”. 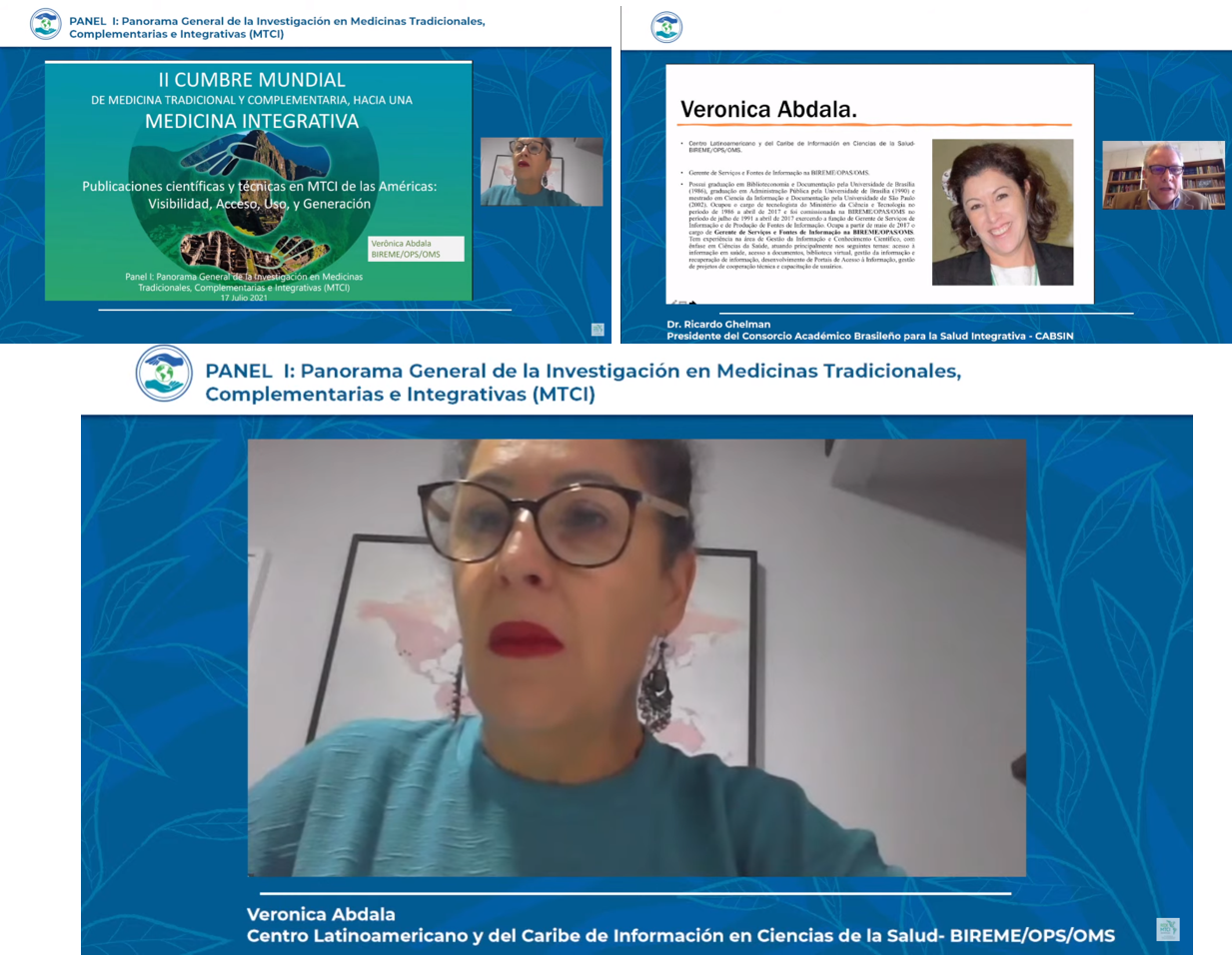 According to Natalia Sophia Aldana, Executive Secretary of the TCIM Network of Americas, the second summit achieved the goal of allowing countries to share experiences on how they have progressed in articulating TCIMs in their health systems and services, in academia, research and regulation. In line with the WHO’s traditional medicine strategy. In addition, above all, it has allowed a meeting and dialogue of knowledge between educators, researchers, knowledgeable predecessors of indigenous communities, decision-makers, collaborators and social actors on the subject. In the speakers’ view, the second summit allowed us to note that various actors are working with MTCIs to contribute to universal health, equity, primary health care, and a multicultural approach to health services.

In his closing remarks, Hernan In his closing remarks, Hernan García Ramírez, Deputy Director of the Directorate of Traditional Medicine and Intercultural Development of Mexico, highlighted the central issues addressed at the summit and the recommendations contemplated in the Declaration that will inevitably become the roadmap for further progress in drafting TCIMs. He referred to the six axes that were signed every day in different seminars and public conferences, where public policies and regulation, research and information management, recognition, protection, promotion, and everything related to the management of health services were discussed. Generation of skills and quality of resources, supplies and therapeutic products. In the end, Hernan endorsed the commitment to support Member States in the recommendations referred to in the Summit Declaration, as well as to promote and motivate them to continue to use the scientific, technical and educational content available in the Virtual Health Library and to share positive experiences. for a virtual global library. He adds: “We adhere to the recommendations of this second Summit Declaration to contribute to the integration and articulation of TCIM in global health systems and services, and the coordinated recommendations in the WHO Strategic Plan 2014-2023, as well as the PAHO Strategy and Action Plan on Race and Health 2019-2025, Struggle For the right to the highest standard of health so that all people can be favored and to promote equality, multiculturalism and quality for progress towards universal health.” 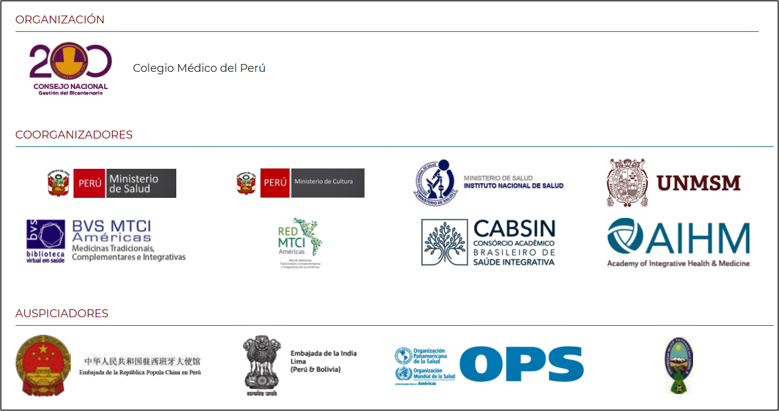 The main conference of the event, with the participation of the representative of the Pan American Health Organization / WHO in Brazil, Socorro Gros. Available in: https://www.youtube.com/watch?v=RzzHUbt_kII&t=145s

Participation by Veronica Abdallah, Director of Services and Information Resources at BIREME. Available in: https://www.youtube.com/watch?v=jML4oa_3azQ

All activities carried out at the Second World Summit are available at: https://www.YouTube.com/channel/UCUBPlnqF2Jd73n26TVtUxqQ