Actor Roberto Manrique, better known as Santiago Vie TV Series “Without breasts yes there is heaven,” he recently revealed that he is openly gay. The Ecuadorean translator revealed his sexual preferences through a post on his official Instagram profile.

In the eight-minute segment, Manrique stated, “I want to tell you something very important and very personal, that I have never talked about, and now I feel the need to do this, and this is my sexuality. It has never seemed to matter to me to say that I am a homosexual, Because I really considered it irrelevant, that there were other aspects of who I really was that were the priority, and I still think that’s the case.”

The star admitted that he felt a rush to open up to his followers after a while without feeling good about himself: “I’ve had a few weird days, weird weeks where I didn’t define what I had, and I was able to go really deep and there I realized I wasn’t done loving myself.”

Looking at his early life, Roberto Manrique said that he grew up in a society in which he was not allowed to show himself as he is: “Roberto grew up in a world that did not allow him to be what he is, even where he cried not of men, where he does not deserve weakness, has been Judging him. Not to mention the fact that I love men, and that I have felt, as far as I can remember, that something is wrong with me. How can I not continue to feel guilty for being who I am?

Manrique noted that the only way to free himself from the “guilt” was to be honest with his fans across digital platforms: “Although, in twenty years, I haven’t felt like I’m living in the closet, I don’t feel that this is coming out of the closet. ‘Cause my wonderful family knows, when I work on any project, my whole circle knows it, and all my friends know, if I meet people during life, I tell them, and my fans know, they’ve stayed in my house with my friend. I don’t really feel like I’m out of the closet, but I was I deceive myself and a part of me didn’t quite flow until I told Roberto inside: ‘You don’t have to feel guilty about it.’

The soap opera’s heart provided a powerful reflection so that each of its followers could feel proud of themselves: “We are perfect, wonderful, loving beings, just as we are. Anyone else who might hear this and feel they have something to feel guilty about, you don’t have to. You are perfect or perfect.”

Roberto Manrique talks about his friend

After revealing that he is gay, Roberto Manrique paid tribute to his friend with whom he has had a strong love affair of seven years.

Although the identity of his romantic partner has not been revealed, the Ecuadorean actor stated that he is a passionate activist who has supported him in each of his social projects in countries such as Ecuador and India.

Carmen Villalobos, Danilo Carrera and Rafael de la Fuente were among the actors who spoke out via the Instagram platform to publicly express their support for Roberto Manrique after he came out as gay.

“I love you from the bottom of my soul. I loved every word you said, Robert.” Colombian actress Carmen Villalobos wrote, “You are the lightest I’ve known in my life.” 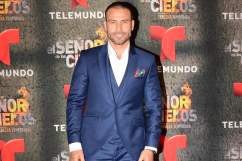