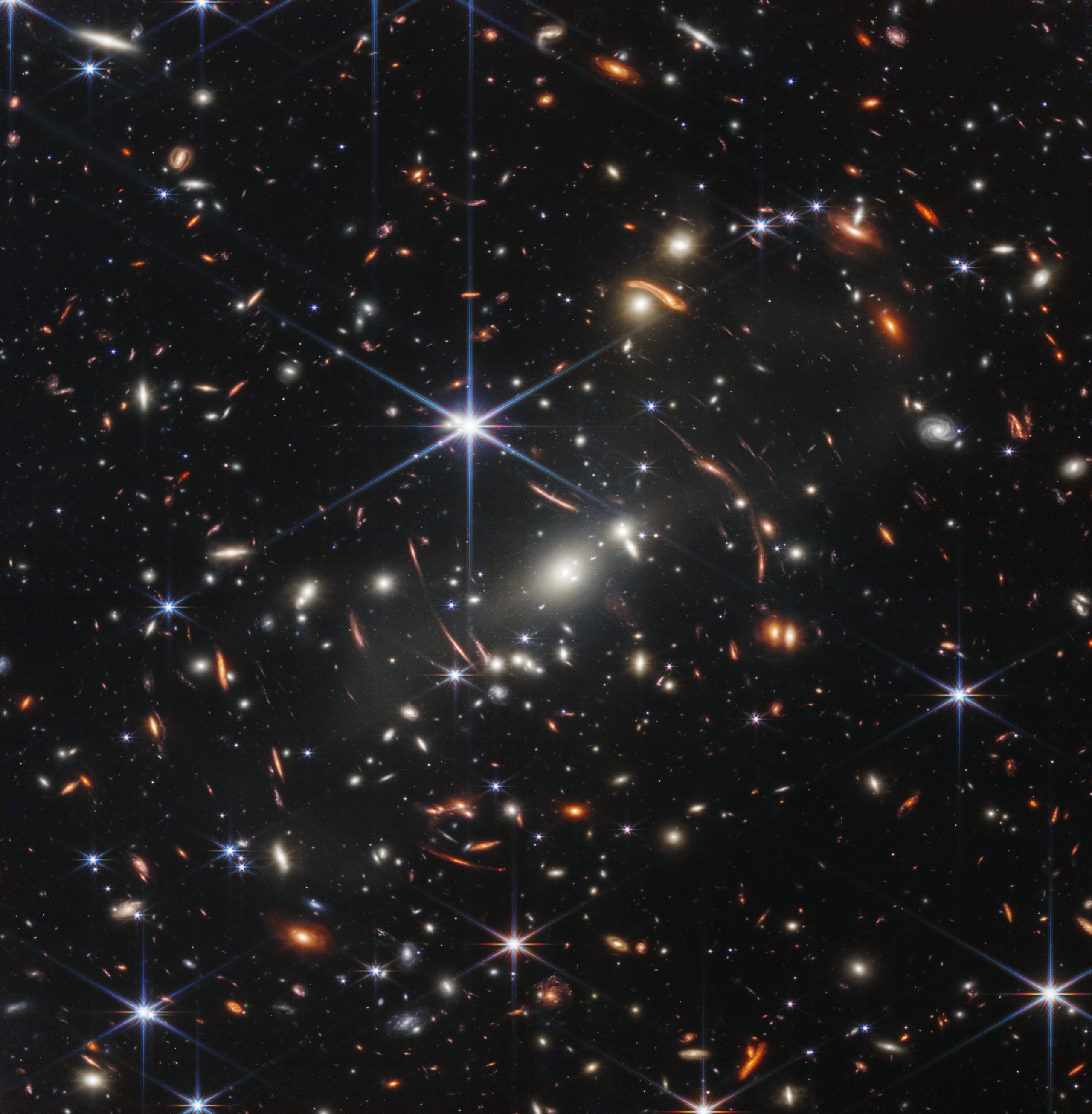 NASA’s James Webb Space Telescope has produced the deepest infrared image of the distant universe to date. Known as Webb’s first deep field, the image of galaxy cluster SMACS 0723 is in detail, as thousands of galaxies — including the faintest of objects observed in the infrared — appeared in Webb’s view for the first time. This part of the vast universe is the size of a grain of sand that a person carries on Earth at arm’s length.
Credits: NASA, ESA, CSA, and STScI

NASA’s James Webb Space Telescope has produced the deepest infrared image of the distant universe to date. Webb’s first deep field is the galaxy cluster SMACS 0723 which is filled with thousands of galaxies, including the faintest objects ever observed in the infrared.

Webb’s image includes a small portion of the vast universe, which might seem the size of a grain of sand kept at arm’s length to someone observing it from Earth. The combined mass of this galaxy cluster acts as a gravitational lens, magnifying distant galaxies, including some that appeared when the universe was less than a billion years old. This deep-field, taken with the Webcam’s Near Infrared Infrared Camera (NIRCam), is a composite of images of different wavelengths, totaling 12.5 hours of exposure – reaching depths at infrared wavelengths beyond the deepest fields of the Hubble Space Telescope, which took weeks . And this is only the beginning. Researchers will continue to use Webb to take longer exposures, revealing more about our vast universe.

This image shows the galaxy cluster SMACS 0723 as it looked 4.6 billion years ago, with many galaxies in front and behind the cluster. When researchers begin looking at Webb’s data, more information about this group will be revealed. This field was also imaged by the Mid-Infrared Instrument (MIRI), which monitors light in the mid-infrared.

The NIRCam webcam has brought distant galaxies into sharp focus: it has tiny, faint structures never seen before, including star clusters and diffuse features.

It took the light from these galaxies billions of years to reach us. When we look at the smallest galaxies in this area, we’re looking back less than a billion years after the Big Bang. Light was stretched through the expanding universe to the infrared wavelengths that Webb designed to observe. The scientific community will soon begin to learn more about the mass, age, history and composition of these galaxies.

Other features include the notable curves of this field. A galaxy cluster’s strong gravitational field can bend rays of light from distant galaxies behind it, much like a magnifying glass bends and distorts images. Stars have also been captured with prominent diffraction peaks, while appearing brighter at shorter wavelengths.

The image, captured by Webb’s MIRI instrument, presents a kaleidoscope of color and highlights where dust, an important component of star formation and, ultimately, life itself. Blue galaxies contain stars, but very little dust. The red objects in this area are covered with thick layers of dust. Green galaxies are full of hydrocarbons and other chemical compounds. Researchers will be able to use data like this to understand how galaxies form, grow and merge, and why, in some cases, they stop forming stars altogether.

In addition to capturing images, two of Webb’s tools also obtained spectra, which are data that reveal the physical and chemical properties of objects and will help researchers determine more details about galaxies far in the field. The Near Infrared Precision Shutter Array (NIRSpec) detected 48 individual galaxies at the same time – a new technology used for the first time in space – sending out a full beam of detail about each one. The data revealed light from a galaxy that traveled for 13.1 billion years before it was captured by Webb’s mirrors. The NIRSpec data also showed how detailed the spectra of galaxies are with Webb’s observations.

Finally, the slit-free near-infrared spectrometer (NIRISS) used wide-field spectroscopy to simultaneously capture the spectra of all objects in the entire field of view. Among the results, this shows that one of the galaxies has an inverted image, or inverted image.

SMACS 0723 can be seen near the constellation Fulan, the Flying Fish, in the southern hemisphere sky.

The James Webb Space Telescope is the world’s premier space science observatory. Webb will solve the mysteries of our solar system, see beyond the distant worlds around other stars, and explore the mysterious structures and origins of our universe and our place in it. Webb is an international program led by NASA with its partners: the European Space Agency and the Canadian Space Agency.

NASA Headquarters oversees the mission of the agency’s Science Mission Directorate. NASA’s Goddard Space Flight Center in Greenbelt, Maryland, manages Webb for the agency and oversees work on the mission by the Space Telescope Science Institute, Northrop Grumman, and other mission partners. In addition to the Goddard Center, several NASA centers have contributed to the project, including the agency’s Johnson Space Center in Houston, the Jet Propulsion Laboratory in Southern California, the Marshall Space Flight Center in Huntsville, Alabama, and the Ames Research Center in Silicon Valley. California, among others.

NIRCam was built by a team from the University of Arizona and the Lockheed Martin Center for Advanced Technology.

MIRI and NASA contributed to MIRI, and its hardware was designed and built by the nationally funded Consortium of European Institutes (the European MIRI Consortium) jointly with the Jet Propulsion Laboratory and the University of Arizona.

Canadian Space Agency NIRIS contributed. This tool was designed and built by Honeywell in collaboration with the University of Montreal and the National Research Council of Canada.

NIRSpec was built for the European Space Agency by a consortium of European companies led by Airbus Defense and Space (ADS), with Goddard Space Flight Center providing its precision shutter detection subsystems.

For a full set of Webb’s early images and spectra, including downloadable files, please visit:
https://webtelescope.org/news/first-images

Read this story in Spanish here.