Skip to content
A man gets vaccinated in the United States. EFE / Stephen Fraser / Archive

The United States has surpassed 200 million vaccines against the corona virus used, confirmed by President Joe Biden, Fulfilled his promise to break this number of immunizations in the first 100 days he was in office.

“We reached 200 million vaccines on the 92nd day of office,” Biden said It is considered an “incredible achievement for the nation” because it would have taken “more than 220 days, more than seven and a half months” to achieve this figure, given the vaccination rate in the country when he took office..

Beginning Monday, everyone over the age of 16 will be eligible to receive immunizations nationwide. He pointed to more specific figures for the vaccination strategy, which means that when he took office, only 8 percent of people over the age of 65 received the first vaccine, and now it is over 80 percent.

This is as described by the President, “Dramatic decline in mortality over 65: 80 percent reduction”.

“If you are over 16, you can now request your free vaccine against COVID-19“The president said it would extend the age limit for access to immunizations. “Americans over the age of 16, this is your turn now,” he reinforced.

On the other hand, he cited the immunization effort against teachers, school staff, bus drivers and day care workers, which has allowed schools across the country to gradually return to face-to-face classes. 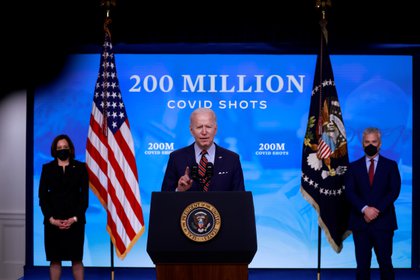 However, Although the United States has already been able to vaccinate more than half of its adults, Biden provided financial incentives for those who have not yet been vaccinated.

Through tax credit, the move will allow companies with less than 500 employees to fully cover the cost of providing up to 80 hours or 10 working days to employees who need to be vaccinated.

“Any American who works for deciding to fulfill his patriotic duty to be vaccinated should not lose a dollar in his salary.”, Is considered the president when explaining this new stimulus.

According to the Centers for Disease Control and Prevention (CDC), only 43 percent of workers nationwide have received at least one dose, making them one of the highest-risk groups for immunity to the virus.

Studies have shown it Suspicions about vaccines have diminished since its inception, But executives believe vaccination should be made easier and more attractive, especially for younger Americans who are less at risk of contracting the virus and do not feel as urgent as adults. I.e. delivery Incentives and incentives to get vaccinated, As well as reducing the friction around the vaccination process. 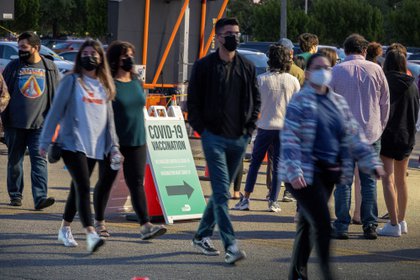 People line up to receive the Govit-19 vaccine at the FEMA vaccination site, which opened on April 5, 2021 at Miami-Tate College in Miami, Florida, USA. EFE / EPA / CRISTOBAL HERRERA-ULASHKEVICH

It is important for the White House that the goal is to increase the number of Americans vaccinated in the coming months Restore the unity of default around the July 4 holidays, and at the beginning of the next school year.

The United States is on track to vaccinate all adults by the end of May and all Americans by the end of July. But the administration of injectables will be another matter.

Finally, Biden reiterated and encouraged people to get vaccinated. “For Americans 16 and older, this is their turn now. So get vaccinated by the end of May.”

With information from Europa Publishing

They have identified another variant of the corona virus in the United States, which may be more resistant
COVID-19 coinfection: Two people with two types of infection open the discussion simultaneously
Do COVID-19 vaccines protect against viral strains?