The Special Lava Gato Team The accusatory motion was drafted against Former President Martin Vizcarra (2018-2020), for which a 15-year prison sentence was requested for the crime of bribery.

The prosecutor’s accusation includes two cases, detailed Public Prosecution In a statement released Friday. These are the Lomas de Ilo Project and the Moquegua Hospital Expansion and Improvement Project, undertaken when Vizcarra was provincial governor.

The Attorney General’s Office also requested a nine-year disqualification against the former head of state from holding public office. 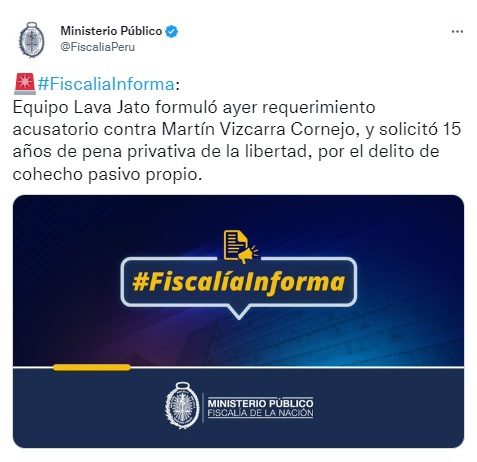 In 2020, the team investigating the Lava Jato case in Peru has already been asked by Attorney General German Juarez to question Vizcarra on two occasions, as companies that won tenders in Moquegua, where he was a famous provincial governor, are also being investigated. In the Building Club.

It is about a group of companies that supposedly share public works in exchange for bribes from a millionaire.

The Public Prosecutor’s Office reports that it has been able to reactivate the mechanism for international judicial cooperation with the Brazilian authorities in connection with the Odebrecht case, which was suspended on November 1 at the request of the company.

The initial decision of the Federal Public Ministry of Brazil was adopted in response to a lawsuit brought by Novonor, which is a precedent Odebrechtwhich denounced the Peruvian authorities’ violation of the agreement signed between the parties, which includes “not using evidence presented in Brazil” against the company in that jurisdiction.

Odebrecht’s case: Lava Jato’s special team managed to reactivate the cooperation mechanism with the Brazilian authorities
Rafael Villa in the Odebrecht case: “Much progress has been made in discovering the truth”
The attorney general’s office will be part of the process against PPK and may seek civil damages of $4.2 million.