A closed court hearing in a Moscow court is expected to formally ban the political and anti-corruption networks of imprisoned opposition leader Alexei Navalny, a ruling that would represent a broader attempt to crush the Kremlin’s biggest political threat.. The evidence to be used in the case is itself a state secret. Navalny’s lawyer was informed that he would have access to the file shortly before, according to his ally, Ivan Zhdanov.

If the court responds to the public request of the public prosecutor The Navalny political group and its anti-corruption institution as extremist organizations – I would like to place them alongside the Islamic State, Al Qaeda and the Taliban in the eyes of the Russian authorities. 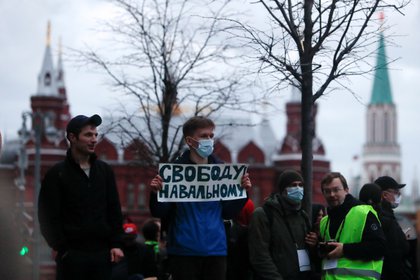 A man holds a banner reading “Free Navalny” during a rally in support of imprisoned Russian opposition politician Alexei Navalny, with the Kremlin in the background, in Moscow, Russia on April 21, 2021. Reuters / Maxim Shimetov

And human rights defender Amnesty International said that this would be “one of the most serious strikes on the right to freedom of expression and association in the history of post-Soviet Russia.” Even selling fridge magnets or wearing Navalny shirts with the “Russia Will Be Happy” slogan could result in a prison sentence. Navalny’s team members could face six years in prison if they continue to work.

Putin’s enemy Navalny described life in prison with a dark sense of humor. Now your messages are just dark.

A donation to Navalny’s crowdfunding organizations would be similar to supporting terrorists, with penalties of up to 10 years in prison. Retweeting previous videos of the Navalny Group, exposing corruption of Russian politicians and bureaucrats, could also mean jail time.

Russian authorities have already barred Navalny and many of his allies from running in the elections, and have outlawed repeated advocacy or participation in unauthorized protests. Many went into exile to avoid imprisonment. 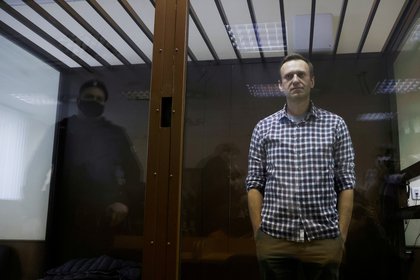 Navalny, who was poisoned with a chemical nerve gas in August and jailed in February, announced the end of his 24-day hunger strike on Friday after medical warnings that he was facing death. On Wednesday, thousands of demonstrators took to the streets across Russia to demand his release.

“It reminds me of the Soviet trials, when someone was declared a spy or a foreign agent, and then a secret trial took place behind closed doors,” said Zhdanov, director of the Navalny Anti-Corruption Foundation, who fled the country earlier this year. “Putin is trying to return Russia to the Soviet past.” Banning the organization as an extremist “will open the door to widespread repression. The authorities really want to destroy us because our activity makes them vulnerable and they feel so.”

Putin and his government see themselves as the true patriots of Russia, and state media describe Navalny as a “Nazi” pushed by foreign powers to destroy the country.

But the conflict in Russia is about two competing visions of the country: one facing the outside and democracy, the other facing the inside, which is increasingly isolated and paranoid, forcing some young scientists, computer scientists and engineers, among other things, to migrate to freer countries. 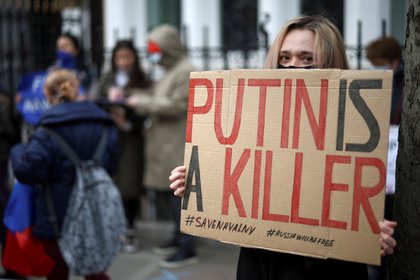 A woman holds a poster as she participates in a rally in support of imprisoned Russian opposition politician Alexei Navalny in front of the Russian Embassy in London, Britain, on April 21, 2021. Reuters

“It would not be safe for our employees and the people who work for us to continue. Of course, we will have to reformulate certain parts of our activity, but we will not stop,” Zhdanov said.

Russian flags are stacked in the corner of Navalny’s headquarters in Tomsk, the Siberian city where he was poisoned last August, an attack attributed to Russian agents on Putin’s orders. The Kremlin denies any connection.

Regional Headquarters Director Ksenia Fadeeva, 29, is one of two Navalny Tomsk members who were elected to the local council last year. On the office wall is a large map with all of the city districts numbered and numbered with a pen. He said, “I love my country, but I know something is wrong.” “I don’t want to sit here and do nothing. I want to change things.”

Videos of Alexei Navalny in prison

“We all know what the risks we face. They can file new criminal cases or silly charges. They will do everything they can to destroy our lives. We understand what could happen, but we can’t think too much about it or we will go crazy.”

Fadieva did not comment on what would happen if the organization was banned.

Tomsk colleague Andrei Fateev was sentenced to 30 days in prison due to a protest on Wednesday in Tomsk. “It is a dangerous thing in Russia in general, whether you are a businessman, a politician or an activist,” Vatiyev said in an interview earlier this month.

But he thinks “Russia will change.” “The goal of the regime is to hold on to power … But I don’t think they have the ability to consolidate their power as they are trying now,” he said.

Maria Elukina, a member of the punk rock political group Bossi Riot, who was imprisoned for nearly two years over an anti-Putin protest in 2012 at the Cathedral of Christ the Savior in Moscow, said it was the suppression of dissent and the imprisonment of activists. Now “part of everyday reality” in Russia. “It happened in small steps, which shut everything down,” said Aliokhina, who is now under house arrest, awaiting trial for her role in the January protests in support of Navalny. All these crazy naming laws [de organizaciones no gubernamentales] As foreign agents and foreign agents, heavy fines and imprisonment. “

Classifying Navalny’s organizations as extremist “means that if you post a link to them, you can go to jail. What it means is that a large part of the country could be imprisoned. She spends 12 hours a day, six days a week in jail,” said Aliokhina, Police and army uniforms, “We are all illegal.” “It’s Stalin’s doctrine.”

An 80-year-old Muscovite who took part in a rally in support of Navalny on Wednesday feared that Russia was heading toward a form of authoritarianism worse than it was in the Soviet era. After the collapse of the Soviet Union, “We expected a brighter future. “But we missed the moment when there was openness and this ability to speak and express your opinion to do something,” said Galina, who spoke on condition of not using her last name for fear of repercussions. “Now we have this new control as the secret services oppress everyone.”

Russia has arrested Alexei Navalny’s top aides ahead of Wednesday’s protests against Vladimir Putin
Putin, Russian Macho: Prohibiting Equal Marriage, Shutting Down the Trap on the Gay Community and Establishing “Faith in God” as a Central Value