Skip to content
A patrol camera recorded the moment he was shot, before he found shelter in the El Paraiso tunnel

At least three agents of the Venezuelan Scientific, Criminal and Criminal Investigation Authority were injured on Thursday in Ambush by members of criminal gangs operating around Avenida Cotta 905 in Caracas.

The attack began at the height of the El Cementerio neighborhood when several cars with members of the Cicpc force passed near the El Paraíso tunnel and Men with long weapons surrounded them and fired a barrage of shots at them from different points on the site.

Social media users living in the vicinity took photos of the violent incident and warned neighbors not to approach the area for security reasons.

When escaping from gunfire, The men in uniform left their cars on the highway and took refuge in the tunnel while awaiting medical support and assistance. Criminals used these moments to steal Cicpc’s patrol and the weapons inside. Then agents from the Special Procedures Brigade arrived to assist in the ambush, and the wounded were taken to Perez Carreno Hospital.

An hour after the first shot, at around 3 pm, the deployed officers were ordered to leave. 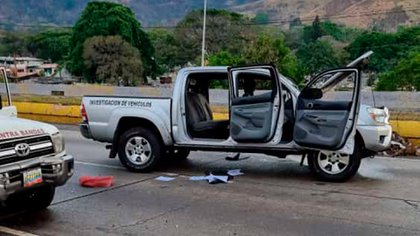 This is how one of the trucks was attacked

The Venezuelan press explains that the people of Caracas are pessimistic about the violent power of criminal gangs in this region, as every week there are clashes with dead and wounded people, forcing residents to remain locked in their homes so that they are not in danger.

The Venezuelan Observatory of Violence, a non-governmental organization, reported it less than four months agoVenezuela was the country with the deadliest deaths in Latin America in 2020: 11,891 people died from violent causes, meaning that the death rate was 45.6 per 100,000 people. 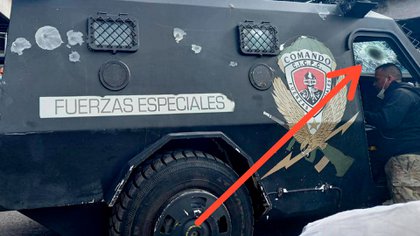 The armored vehicles were hit by several bullets

Those deaths included 4,231 people who died in cases of “resistance to power,” 4,153 murders and 3,507 deaths under investigation, said OVV director Roberto Briceno Leon.

The OVV also noted that In 2020, there has been a weakening of small gangs and the strengthening of large gangs dedicated to organized crime. The organization noted that “this process was accompanied by a decrease in the crimes of robbery, robbery and kidnapping of small gangs.” In parallel, There was an “increase in large gangs of extortion crime applied to a small number of active economic activities and the acquisition of foreign currency.”

Eight Venezuelan Soldiers, FARC Chief, Thousands of Displaced Persons, Dozens of Detained Killed: This is how the conflict continues in Apure
The strong response of the United States to a message from the Nicolas Maduro regime calling for an end to sanctions