Shares on Wall Street rose to new highs on Thursday after the extraordinary results of major banks and good data on employment and retail sales in the United States.

The New York Stock Exchange welcomed with open arms the impressive quarterly results of United Health, which added to those that were known on Wednesday from the banking sector, such as Goldman Sachs, which announced that it had had a net profit of 6,836 million in the first quarter of 2021, 464% More than the same department last year.

JPMorgan Chase also reported that it made $ 14.3 billion in profit in the first quarter of 2021, nearly five times what it was in the same tranche of last year.

Although it was the Dow Jones and S&P who reached historic numbers, it was the Nasdaq index that recorded the highest daily gains among the three major indices. Thanks to the good performance of tech giants like Facebook, Amazon, Apple, Netflix or Alphabet (Google’s parent company), which rose more than 1%.

On Wall Street, expectations are very high for the economy to recover after the crisis caused by the Coronavirus pandemic. The new reports only reinforced those expectations, including those showing Americans ‘ability to spend again, cutting workers’ job losses and increasing corporate profits.

The Retail sales increased by 9.8 percent in March compared to the previous monthAs Americans spent more on restaurants, sporting goods, gardening and cars as coronavirus vaccines spread. A large part of the increase was due Payments of $ 1,400 from the US government’s latest bailout have reached families’ bank accounts.

The Labor Department said last week 576,000 new unemployment claims were filed, Seasonally, Much lower than analysts expected And the lowest since the week ending March 14, 2020, before the Coronavirus directly caused business disruptions and millions of layoffs.

“Even though 34,000 is just a number, it’s a massive achievement when you think about what we were right now last year,” said Ryan Detrick, Head of Financial Market Strategy at LPL. “The speed and flexibility of this economic recovery have never been seen and help justify market records,” he added.

The data boosted confidence in the US economic recovery. Analysts also cited lower US Treasury yields as a catalyst in early earnings. 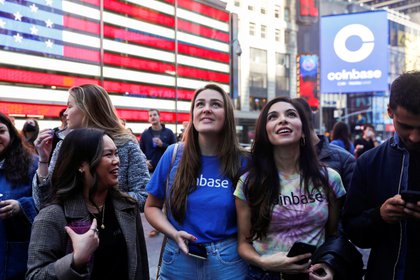 Stimulus and vaccination programs and measures of gradual economic reopening have an immediate positive effect on the economy, (Reuters / Shannon Stapleton)

To add to optimism, more large US companies posted better earnings for the first three months of 2021 than analysts had expected. Expectations are already high for this earnings release season, which kicked off informally on Wednesday and could lead to the strongest growth in more than a decade.

See also  More lift mask requirements in the US

The stimulus and immunization programs and measures of gradual economic reopening have an immediate positive effect on the economy, Although the infection continues to spread in some states of the country.

In an interview with CNBC, BlackRock CEO, Larry FinkShe celebrated the investment fund’s good results for the first quarter, but warned: “If this growth is not maintained in the next 10 years, we will have problems with deficits.”

Industrial production in the US saw a slight increase in March, driven by mining, after the polar cold wave in February, but the overall level is still lower than it was before the pandemic. The rise was 1.4% in March compared to February, according to data released Thursday by the Federal Reserve. It is a lower than expected number by analysts who had forecast + 2.9%.

For their part, oil prices rose again this Thursday, to their highest level in a month, after strong indications in the United States. A barrel of North Sea Brent crude for June delivery closed at $ 66.94, up 0.54% in London. Meanwhile in New York, a barrel of West Texas Intermediate crude for May closed at $ 63.46, an increase of 0.49%.

Phil Flynn of Price Futures Group summed up: “We had explosive consumer data that pushed up oil prices and indicated that we will have strong demand.”