SpaceX managed to land its prototype Starship missile on Wednesday On his fifth attempt, according to a live broadcast of the American company.

The test flight represented a major victory for space company Elon Musk after the last four attempts had ended in explosions.

The execution was not entirely perfect, as a small fire engulfed the spacecraft’s 50-meter base shortly after landing.

SpaceX broadcaster John Innsbrucker explained that this is “not strange with the methane fuel” used by the missile, adding that engineers are still working on solving design problems.

According to the photos, company workers quickly put out the fire with water cannons.

The missile, called SN15, took off from Boca Chica base in southern Texas at about 5:25 pm (10:25 pm GMT), before it reached an altitude of about 10 kilometers and carried out a series of flight maneuvers.

SpaceX was facing additional pressure to succeed in its flight Wednesday after NASA announced that a copy of the spacecraft will be used as a lander on the surface of the Moon when the US space agency returns humans to the moon.

All four previous test flights ended in explosions, during or shortly after landing in the far southeast of Texas near Brownsville.

SpaceX’s latest upgraded version of the stainless-steel bullet-shaped space rocket soared more than 6 miles (10 kilometers) over the Gulf of Mexico before flipping and descending horizontally, then rotating vertically in time for landing.

“Starbase Flight Control has confirmed, as you can see from the live video, that we are stationary. The spacecraft has landed!” Announced the launch of commentator John Insprucker. 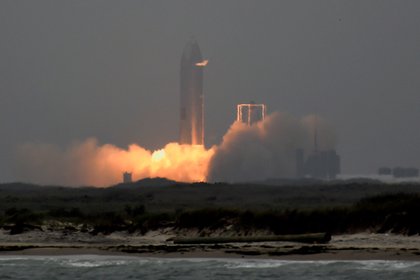 The success happened on the day celebrating the 60th anniversary of the first American flight into space, Alan Shepard. It wraps up two weeks of accomplishments for SpaceX: the launch of four more astronauts to the NASA space station, the nation’s first night-time landing since the Apollo lunar missions, and a pair of launches of its miniature satellites for the Internet.

Less than a month ago, NASA chose the SpaceX spacecraft to bring astronauts to the surface of the Moon for years to come. However, the $ 3 billion contract was put on hold last week after loss-making companies Blue Origin and Jeff Bezos’s Dynetics protested to be selected.

Musk said last month that NASA’s money would help develop the Starship., Which will eventually be launched on the Super Heavy. So far, he said, it was a “very expensive” project that was mostly internally funded. It was the first high altitude test in December.

“You see, if you watch the videos, we might expand on some of them. So excitement is guaranteed one way or the other,” After the second flight of the private company’s crew on April 23, Musk told reporters.

(With information from Agence France-Presse and the Associated Press)