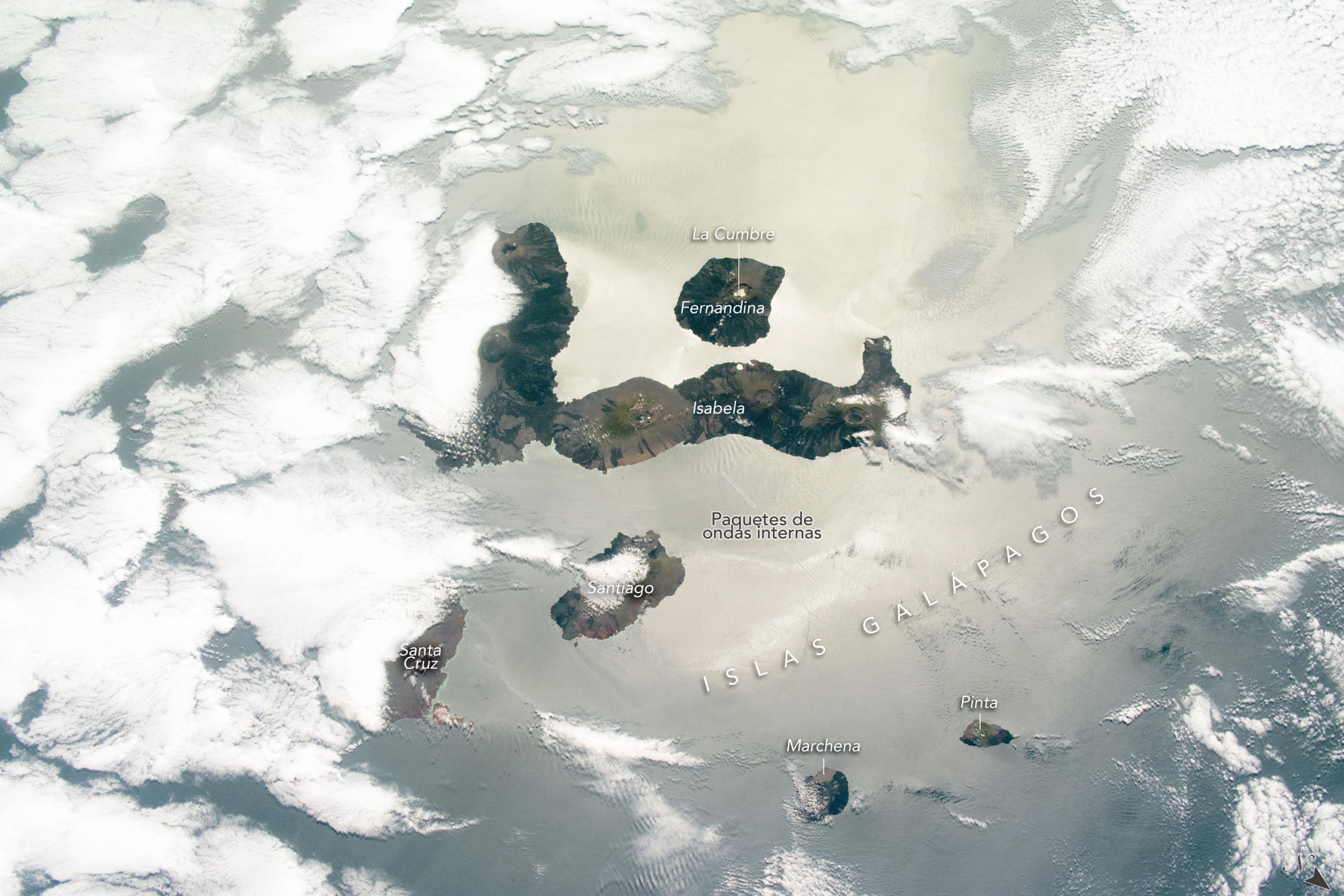 This image, taken by an astronaut on the International Space Station, offers a glimpse of many of the Galapagos Islands, visible among the clouds and highlighted by the solar flare on the ocean’s surface.

The solar flare helps reveal features that are often difficult to detect, such as the lake that occupies the physical caldera of La Cumbre, the shield volcano that forms Fernandina Island. Fernandina Island, the smallest and most active volcanic island in the Galapagos archipelago, formed less than a million years ago, and its last eruption occurred in January 2020. The lake was formed after the physical caldera of La Cumbre collapsed during a violent period. The eruption of the volcano in 1968. The size of this lake changes with each eruption.

Reflection of sunlight also reveals inner wave bands that surround the Galapagos Islands. These images of internal waves and their movement can help researchers estimate potential changes in the water column and monitor the effects of climate change on marine communities. For example, coral bleaching can be affected by rise to the surface and transport of water that is above or below normal temperature ranges.

The Galapagos Islands chain is home to at least 9,000 species, including the giant tortoise, the wild iguana, and the Galapagos penguin. Most of the wild birds and reptiles native to the archipelago are rarely found anywhere else on Earth. In 1959, in an effort to conserve and protect the indigenous wildlife, the Ecuadorean government declared the entirety of the Galápagos a national park. This fragile environment is threatened by the intensification of the El Niño Southern Oscillation due to climate change.

Astronaut ISS064-E-343 image acquired on October 24, 2020 with a Nikon D5 digital camera, with a focal length of 50 mm. It was provided by the International Space Station Crew Earth Observation Facility and the Earth Science and Remote Sensing Unit at Johnson Space Center. The image was taken by a member of the Expedition 64 crew. The image has been cropped and optimized to improve contrast, and lens defects have been removed. The International Space Station program supports this laboratory as part of the International Space Station National Laboratory to help astronauts capture images of Earth of great value to scientists and the public, and to make these images easily and freely available on the Internet. Additional images taken by astronauts and astronauts can be viewed on the Portal Imagery of Earth platform by NASA/JSC astronauts. Image caption by Amber Turner, under JETS contract at NASA-JSC.